Premise- One contestant, named “the hero”, plays against a maximum of ten other contestants in a series of “rapid-fire” quiz rounds. Some of the rounds are designated as “Specialty Rounds”, and all the questions in that round will revolve around a certain subject. In each of the hero’s battles, both contestants will have 20 seconds to come up with a correct answer to each question. If the hero had a difficult time on any question, they could use one of their two passes and pass the question to their opponent. If the hero’s opponent runs out of time answering a question, they will leave the game with nothing, will be dropped through the drop zone their standing on, and the hero will win a reward value worth anywhere between $1,000 up to $20,000 cash. Dropping five opponents gives the hero the option to stop and keep their winnings or keep playing the game. If the hero can eliminate all ten contestants, he/she will win $1,000,000. However, if the hero gets one question wrong at any time during the game, he/she will be dropped, leave the game with nothing, and their opponent will win $10,000. If there’s any time left in a show, a knockout speed round will be played among the remaining contestants. In this round, the contestants will have only 10 seconds to correctly answer a question and for every correct answer that is given, $1,000 will be added to the bank. An incorrect answer eliminates the contestant, and the last contestant standing will win the speed round and the money in the bank. 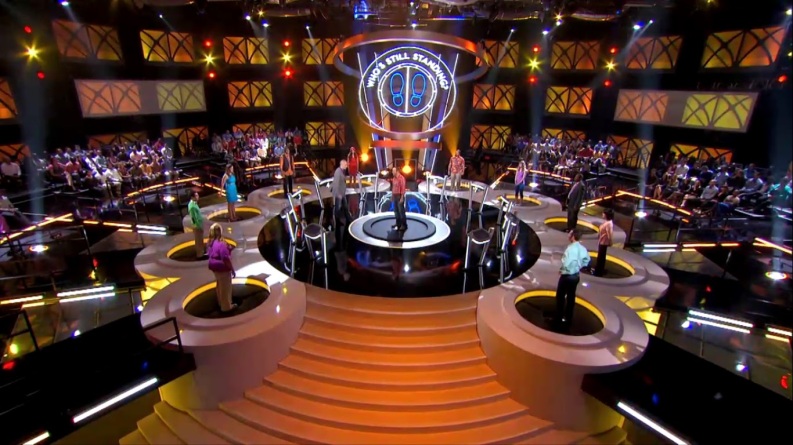 When I first heard about and saw the previews for this show, I immediately thought that this show was going to be like 1 vs. 100 and Russian Roulette combined. I also had high hopes for Who’s Still Standingmainly because it has been a while since I have seen a good U.S. quick-fire trivia game show besides Jeopardy!However, after watching the first two episodes of this new show, my optimistic outlook quickly turned into disappointment and doubts for the show’s future as I had found a lot of mistakes, issues, and problems with Who’s Still Standing. Since I have more complaints than compliments about this show, I’m just going to list exactly where the producers went wrong with the show. 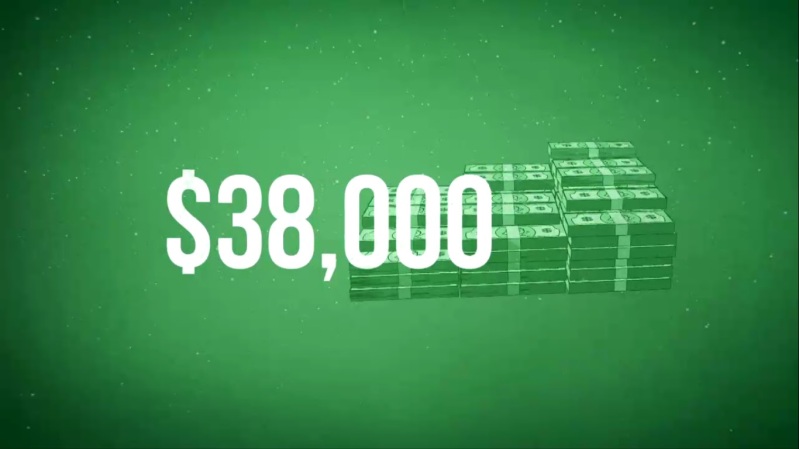 1. Cartoon Animations:  The endless number of cartoon animations used through each episode to display the hero’s current winnings and how many people they have to eliminate to win the game is not necessary. It’s the host’s job to announce the hero’s status in the game. The cartoons animations give the host less to do and make the show look choppy because of how often we see these animations. The only time we should see a cartoon animation is during the introduction of the show to briefly explain the game rules.

2. Specialty Rounds: The random insertions of specialty rounds are not need every other round. Instead, the show just needs to have a category for every round to avoid confusion and speculation to when the specialty round might appear again.

3. Set Problems: The main problem I have with the set is the lack of a big screen to display the hero’s winnings, the number of contestants eliminated and remaining, and the questions. The set looks incomplete and bare without it, considering that it’s a primetime studio game show.

4. Gameplay: Whenever I hear about a show having rapid-fire gameplay, I think of shows like The Chase, Jeopardy, and even Scrabble Showdown. I’m not seeing the “rapid-fire” gameplay, as NBC advertised for Who’s Still Standing. I think that 20 seconds is too long for anyone to think about the answer for a question, the pauses are too long in between each question for a supposedly rapid-fire quiz show, and a majority of the questions that are asked in the show are easy for the most. In my opinion, I think the 20-second time limit needs to decrease one second for every additional question that is asked throughout a hero’s battle to add difficultly to the game and to make it more challenging. The gameplay is competitive at best, but not fast-paced. Also, the host needs to ask the hero whether they want to leave with the money or keep playing the game after every round, and not just after the fifth round to make the game more interesting. It’s been two episodes and I’m already tired of seeing the heroes bail out after the fifth round with two passes remaining. 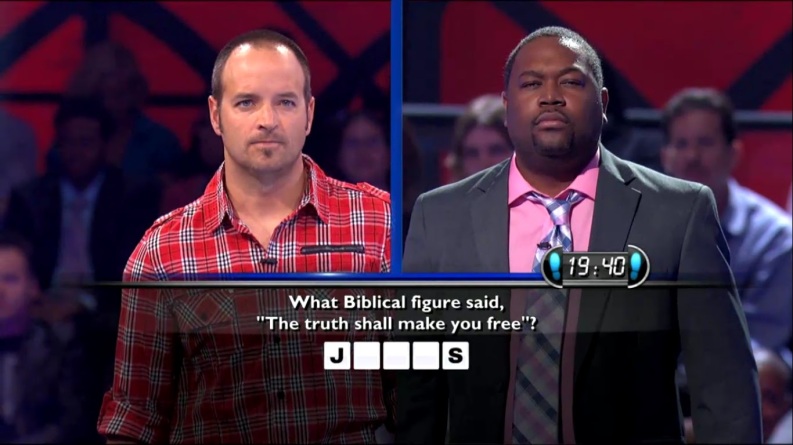 5. Rules?!?: The rules are not properly explained before the actual gameplay begins. The host mentions bits and pieces of the game’s rules throughout the show and doesn’t even explain the cash reward configuration throughout the game. The host only mentions the fact that the dollar amounts range from $1,000 up to $20,000. Having the host not properly explain the rules before each game leaves the viewer confused, annoyed, and irritated trying to guess how to play the game while trying to enjoy the show. This is a huge problem that the show needs to fix immediately.

6. Graphics (or the lack thereof…): NBC usually plagues each of their primetime game shows with hundreds of on-screen graphics about each contestant, their winnings, and other information about the episode. But on this show, we barely see any extra graphics other than the ones used to show the questions and answers. The graphics to show the contestant’s winnings, passes left in the game, and opponents left to eliminate are needed to for this show to keep the home viewers informed about the hero’s status in the game.

7. Sudden Commercial Breaks: The abrupt commercial breaks that occur randomly in the middle of a game in progress are annoying and off-putting. It didn’t work when Minute To Win Itwas doing it and it certainly won’t work with this show. 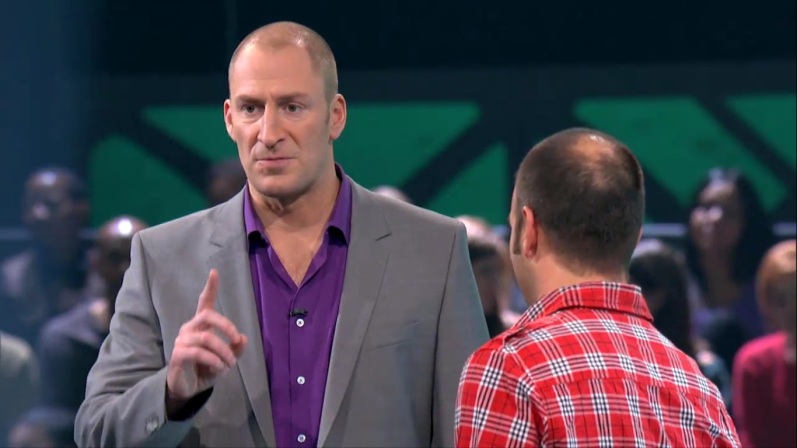 8. Host: Ben Bailey on Who’s Still Standing is not the same two-time Emmy-winning host we see hosting Cash Cab. Bailey looks stiff and kind of bored on this show and pretty much just sticks to the script. However, I do like how he entertains his contestants and consoles them throughout the show if they are unsure about how they will fare in the rest of the game.

9. Overused Narration: The numerous times the producers used the “Santa” narration for the show is unnecessary. The overuse of the pre-recorded narration is killing the show genuineness and taking away from Bailey’s hosting duties, such as introducing the show, closing the show, bringing the show into and out of commercial breaks, announcing the hero’s status in the game, to name a few.

10. End Game Option: The host giving the surviving “winning” contestant the option to either “leave through the door or leave through the floor” is corny and unneeded. The last time I checked, the object of the game was to not get dropped. Giving the contestants that option eliminates the whole point of the show of trying their hardest not to get dropped. 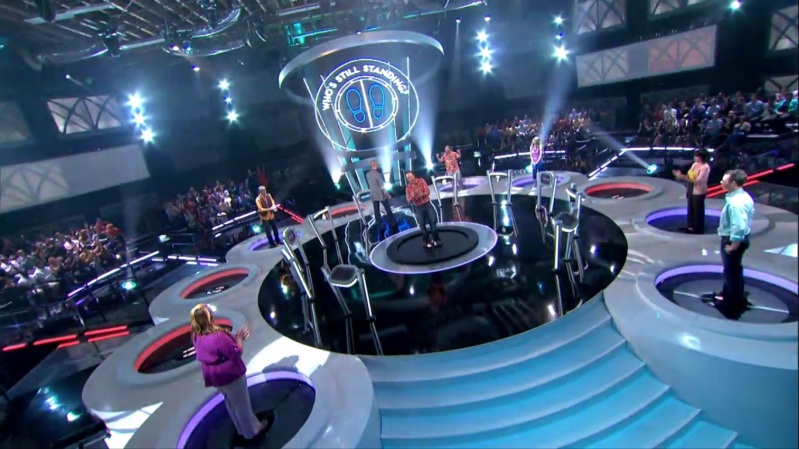 11. Sea-Sick Camera Angles: The tilting, diagonal camera angles that we see from time to time is annoying and disorienting to look at. Normal camera angles will work just as well. There is no need to do all of that extra stuff to put emphasis on an already poorly-executed show.

Although there are a lot of things that I don’t like about the show, there are a few things that I do like. The knockout speed round at the end of the show is the closest thing to rapid-fire gameplay I’ve seen in each show. I like how the contestants only have 10 seconds to come up with a correct answer for each question and the progressive jackpot keeps the game interesting as well. In my opinion, the last seven minutes dedicated to the speed round end game is more exciting to watch than the main game itself. I also like the good mixture of the contestants on each show, how they are dressed like their profession, and the perfect amount of energy they show. 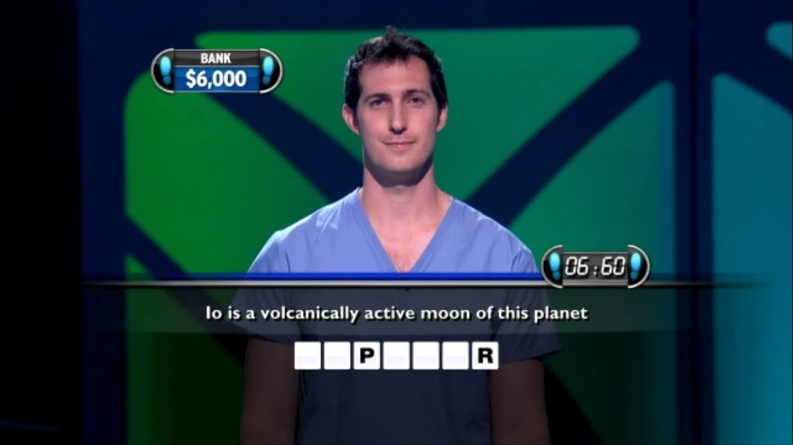 Overall, Who’s Still Standing definitely needs to be improved. This show looks like it was thrown together at the last second and quickly rushed to air. The narration needs to be cut down to a minimum or eliminated altogether and the commercial breaks need to be placed in better spots. Even though the show is placed in an excellent time slot, the show is still not good enough to keep the viewers tuned in for a long period of time and the ratings have proven that.