Premise- Four contestants compete in three physical stunts in complete darkness. The contestants will have to rely on their other senses (touch, smell, taste, sound) in order to do well on the show. Host Jaleel White warns the contestants that “their mind is their greatest enemy and their imagination will get the best of them”. The contestant who performs the least well in each round will be eliminated from the game by jumping down a “Black Hole”. The last contestant standing at the end of the third round will win the game and $5,000. 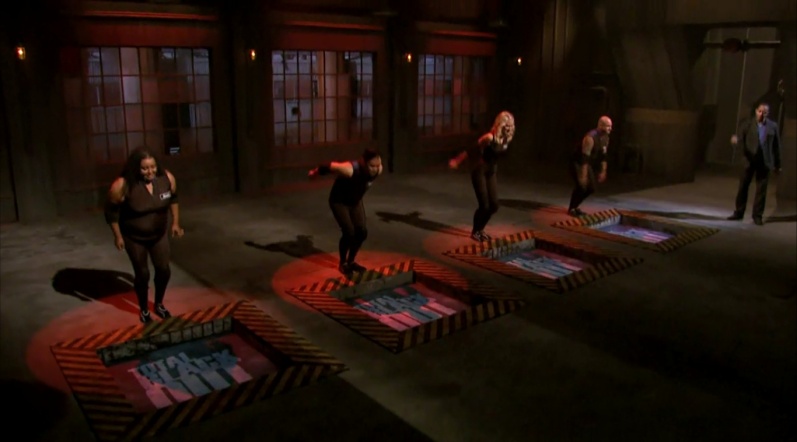 When I first read that SyFy was creating another game show, I immediately had negative thoughts regarding the new show, keeping in mind that the network’s first game show Cha$e flopped after lasting for a season and six episodes. After reading more press releases and articles about Total Blackout as they were being published, my thoughts on the new series changed. Total Blackout is like Fear Factor in complete darkness. This show is like Fear Factor in many ways such as the mind over matter concept and the show engaging the contestants in stunts that tests their physical ability and psychological stability. Despite the show’s likeness to Fear Factor, this is a good game show that is entertaining to watch for the full 30 minutes. It’s very amusing and humorous to watch the contestants freak out over touching simple and common objects like a pineapple or a bra. It’s also very interesting to watch contestants who have admitted to being afraid of the dark perform in each stunt and how they react in extreme situations such as total darkness. The contestant interviews throughout each episode and the show using deception and trickery to mess with the contestants’ minds even more makes the show more interesting and entertaining to watch. Even though Jaleel White doesn’t do much hosting because of how the show is setup, he does a good job for commentating during each stunt and for the little bit of hosting he actually does.

While there are a few things I like about the show, there are a few things about this show that I am not too crazy about. The grand prize is too low for a show like this. While it seems like $5,000 would be a decent grand prize considering that this is a cable game show, it’s not nearly enough considering what the contestants have to endure in this competition. The grand prize needs to be at least $10,000 or $20,000 for this show. Additionally, I don’t like how all the contestants’ attempts at the stunt in each round are blended into a single montage of stunts. I understand why they meshed the stunts together in each round to cut down on time, but they should show each contestant’s stunt attempt one at a time to give the show a more “game show” appeal, rather than a “reality show” appeal, since it is a game show. I am also concerned about the show’s usage of deception in certain stunts (i.e.: the contestants being told they have to balance a tarantula on a hat while navigating through an obstacle course, when in actuality, the “spider” was actually a rubber duck). My fear is when more viewers and potential contestants watch these episodes, they will be desensitize by the additional twists in the stunt, which will lead to the contestants not taking the game seriously as if it were a challenge.

Overall, the show has successfully captured the selling point of Total Blackout, which is watching the contestants freak out in pure darkness. This is a good, funny game show to watch, mainly because of the contestants’ various reactions. I was even impressed by the show utilizing the drop zone better than NBC’s Who’s Still Standing. If you haven’t already, check this show out! Trust me; you’ll like it!

**All screenshots have been taken from the actual episodes of Total Blackout. No ownership is implied.**