Premise- Twelve contestants, or “Attackers”, compete in a series of three obstacle-filled rounds while the “Defenders” try to stop them. In the first round, “Cross the Moat”, the contestants will have to overcome a series of obstacles and try to finish in the fastest time. The six contestants with the fastest times will advance to the second round. In the second round, “Escape the Stockade”, the remaining six contestants will have to find an escape route into the castle courtyard. The first four contestants to escape will advance to the final round. In the third and final round, “Capture the Crown”, the remaining four contestants must race across the courtyard and make it past the Defenders in an effort to capture the crown. The first contestant to capture the crown will win the game and be crowned as the King/Queen of Splatalot for the episode. 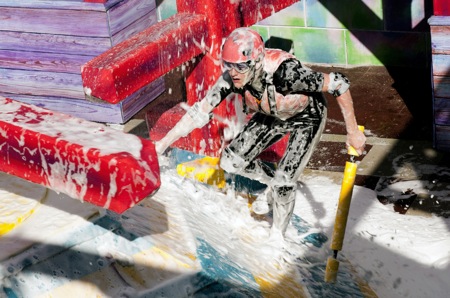 If ABC were to do a special kids’ edition of Wipeout, this is exactly what it would look like. The show is unique in its own way without completely ripping off Wipeout, such as the Splat of the Day replay, the Defenders, and the Attacker’s “Splat Fact” bio and “Battle Cry”, in lieu of the on-location co-host interviewing them. I love the setup of the Castle and the variety of within the second round in terms to of the various versions of the Attackers’ escape route. Although the numerous obstacles within the Splatalot Castle are challenging and difficult, they are just manageable enough to get through. The Defenders remind me of the Gladiators on American Gladiators, with the exception of their intention to distract the contestants rather than to completely hinder them from finishing a round. The actors posing as the Defenders do a great job playing their various roles as obnoxious distractions for the contestants. As for the hosts Matt Chin and Jason Agnew, I like the chemistry between the two and their commentary throughout each round. Like the two Johns on Wipeout, it’s clear who the comedic commentator (Matt Chin) is and who is the “straight man” of the two (Jason Agnew). Chin and Agnew are doing an excellent job of hosting the show through their commentary and humorous banter. 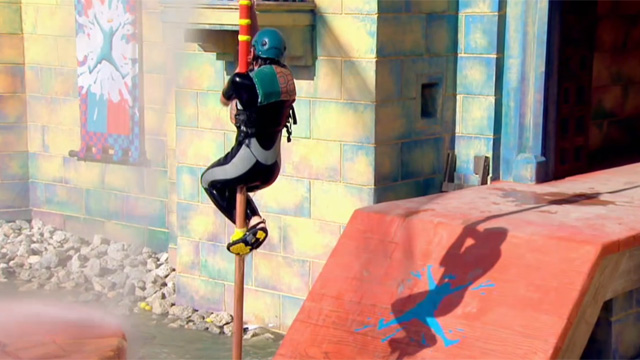 Overall, Splatalot is a creative and good half-hour game show to keep kids engaged throughout each episode. The motley crew of contestants and their personalities also makes the show interesting to watch. Even though there is not an actual grand prize, Splatalot is still a fun and entertaining game show to watch.

Watch new episodes of Splatalot weeknights at 7:30pm on Nickelodeon!!!

Check out the Splatalot website to make your own highlight reel, watch exclusive videos, and play Splatalot games.

**All screenshots have been taken from the actual episodes of Splatalot. No ownership is implied.**