Here’s how the game is played: hosts Derek Gaines and David Magidoff engage random pedestrians in New York City in a series of unique (to say the least) trivia and physical challenges and stunts for “low-budget” cash prizes. That’s about it. It’s as simple as that. Upon watching the first episode of MTV’s latest game show, two shows came to mind: Fuse’s Billy On The Street and the network’s comedic hidden camera series Money From Strangers. 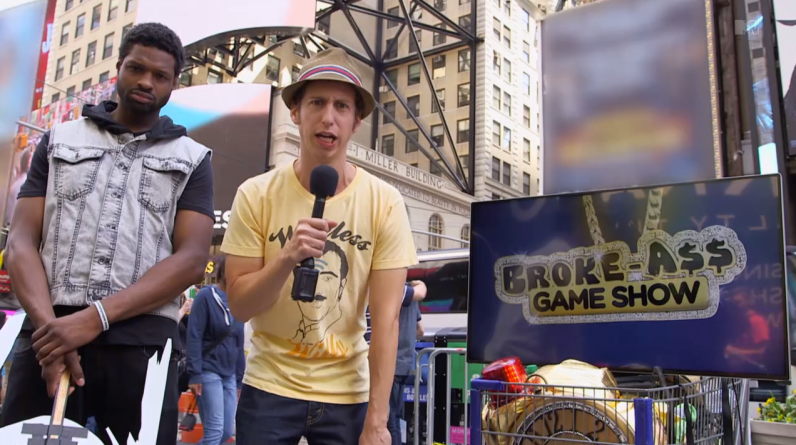 Broke-Ass Game Show has the spontaneity of Billy On The Street combined with the mischievousness and general insanity of Money From Strangers, the latter being humorously exemplified by the “Hot Lava” mini game where a contestant had to make their way from one end of the aisle to the other without touching the floor. Comedians Gaines and Magidoff host the series well with their easy-going and good-natured personalities and show great resiliency whenever they are rudely rejected by pedestrians or (at least in the case in the first episode) by police officers. The other factor that makes this game show mildly entertaining are the short comedic, impromptu bits between games including the duo observing and ridiculously lip-syncing over a couple’s conversation from afar and bribing a pizza delivery man to snack on someone else’s order.

Overall, when it comes to MTV shows nowadays, especially game shows, you’ll never know what to expect and Broke-Ass Game Show successfully emulates that concept. Broke Ass Game Show’s loose, “anything-goes” man-on-the-street format makes the show nearly as entertaining to watch as Money From Strangers. This is a good game show excellently developed for today’s millennial generation with topical, pop culture games like the “twerk-off” stunt involving scantily-clad construction workers, hilariously obscene games like the “Times Swear” Family Feud–esqe game and amusingly awkward games like “Snug Dealer”. As entertaining as this show is and although it’s a bit too early to accurately predict the show’s longevity on the former music-exclusive network, I can envision this show being one-and-done on MTV. On its premiere night working the late-night shift airing at 11:00pm EST, the show averaged a dismal 750,000 viewers. Not a very good start for the rookie game show. But, we’ll see how the series progresses in the later months.

Additional Source: TV By The Numbers