Premise: A team of three contestants answer a series seven questions by attempting to diffuse seven bombs before they explode.  On each question, one contestant will have a certain amount of time to clip the wires that lead to the correct answers on each bomb. Each teammate must answer at least one question in the game. Successfully diffusing a bomb adds the money at stake for the question to the team bank. If a contestant clips a wire which leads to an incorrect answer or if time expires, the bomb explodes, sliming the contestant with a mystery substance (maple syrup, pesto, tomato sauce, etc.), and eliminates them from the game without adding any money to the team bank. Here’s how the game is structured for each bomb: 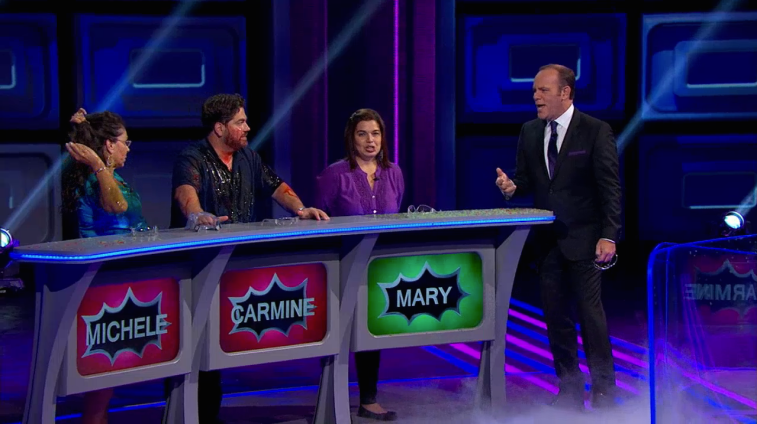 If all three contestants are eliminated before they reach the seventh bomb, the game ends and the team wins nothing. Should the team make it through to the seventh bomb, they will have the option to keep the money they have accumulated or play the Mega Money bomb as a team. Successfully diffusing the final bomb multiplies the team’s bank times four. A perfect game earns the team $500,000.

The BOOM! format, originally developed by Israeli-based Keshet International, was a hot commodity at the MIP-TV global marketing event last spring and became the highest-rated game show to launch in Israel with a 41.2% share and a 26.7 household rating for Keshet Broadcasting’s Channel 2. The production company has sold its format to France, Cambodia, Peru, Argentina, Chile, Uruguay and Spain thus far. After watching the U.S. series premiere of BOOM! Thursday evening, I can see why the show was the talk of the town a year ago.

BOOM’s excellent fast-paced, simple, dexterous and tense format makes this show as fun to play as it is to watch. The gameplay is well constructed with the rising levels of difficulty, big risk/big reward end game, the absence of frivolous elements including “lifelines” and challenging trivia questions. BOOM! successfully tests each team’s speed, strategy, and the ability to think and move quickly under pressure. The physical aspect of the show with the contestants manually clipping the wires under the pressures of time and cash at stake gives you an exhilarating feeling as if they are diffusing an actual bomb in a spy movie. From the hundredth-second countdown clock to the five-second pauses between contestants clipping wires to abruptly cutting to commercial breaks during tense moments, the producers of the FOX version did a wonderful job creating the suspenseful atmosphere on BOOM!. The impromptu commercial breaks would normally annoy me, but it’s far from a deal-breaker on this show considering no gimmicky teasers are added to allow viewers to enjoy each episode without being annoyed by spoilers.

Another laud-worthy element of the new FOX game show is its fluid show flow. BOOM! moves at a swift, consistent pace and does not feel the need to unnecessarily drag out games throughout the entire length of an episode as you may have seen often on modern primetime game shows including Deal or No Deal and Are You Smarter Than A 5th Grader?. The pacing can also be attributed to host Tom Papa’s great ability to move the show along with his sense of urgency in making sure the contestants are mindful of the ticking time bomb, especially when the clock resumes with each correct answer and the contestant feels the need to celebrate.

The one aspect of BOOM! which surprised me the most was how engaging the show is with its fantastic play-along factor. The show’s inclusiveness gives everyone a chance to join in on the action from the studio audience getting slimed in the “splash zone” every time an explosion occurs to the home viewers answering the same questions through the second screen interactive live mobile game. As I have previously mentioned in one of my most recent articles, app users will also have a chance to play the game at any time between shows on the “Play 24/7” practice mode and hone in their BOOM! skills in time for the new episode. Although the app functions well in both game modes, the only major drawbacks to the mobile game are that it’s not quite in sync with the live broadcast, which may cause users to cheat by waiting for the contestants’ responses and could possibly spoil the results of each team’s performance throughout the game.

Overall, the production team has done a stellar job with the development of the American version of BOOM! and not making drastic changes to an already solid format. This is a textbook example of a fun and entertaining game show filled with messy stunts and big cash payouts to air during the summer. Even though I have no complaints about the show, my only concern lies within its potential viewership competing as it struggled against the season premiere of CBS’s cornerstone summer really series, Big Brother. In its first night out, BOOM! averaged a surprisingly disappointing 2.5 million total viewers. Those figures should change for the better with Big Brother moving to 9:00pm. Despite the lackluster debut, I predict BOOM! will be picked up for a second season.

Watch new episodes of BOOM! every Thursday at 8:00pm ET on FOX! Check out the premiere episode on FOX.com now, in case you missed it.

**All screenshots have been taken from the actual episodes of  BOOM!. No ownership is implied.**