Premise- A team of two contestants are instructed that they will be playing on an Internet trivia game show for $2,500 with host Adam Ray. While the team is in the green room, one of the show’s producers tells them they will be playing the game separately and will take one partner on stage to the real show, without their partner’s knowledge, while Ray takes the second partner to the Internet show. During the game, the second partner answers the questions while the on-stage partner selects the categories. While the second partner believes they are playing for up to $2,500, the on-stage is told they are actually playing for 100 times the dollar values, ranging from $1,000 to $250,000. If at any time the second partner is struggling with a question, they will have two helps available: Crowd Source (essentially “Ask The Audience”) and Smart Phone (partner calls on-stage partner). A correct answer wins the team the dollar value at stake while an incorrect answer ends the game with the team leaving the show with nothing. The game may also end if the second partner stops the game and opts to keep the money or if the on-stage partner stops the game (upon surpassing the $25,000 level), but risks losing half of their winnings. Occasionally between rounds, the on-stage partner plays a mini game called Mind Meld. In Mind Meld, both partners are asked a question about how well they know each other. Matching answers wins the team a bonus prize that is theirs to keep regardless of the game’s outcome.

Since TBS had reignited its endeavor into airing original game shows a couple of years ago, the network has been tepid in its recent attempts. We’ve seen short-lived successes in Deal With It and the competitive reality series King of The Nerds, and failing flops with Trust Me, I’m A Gameshow Host and Bam’s Bad Ass Game Show. After watching Separation Anxiety, I believe the new game show has the potential to become a hit on TBS, but will inevitably fall by the wayside and face cancellation by the season’s end. Before I delve into my brief line of reasoning of the show’s impending doom, I’m going to focus on the pros and appeals of the series. As I have stated last week in my article highlighting the show’s debut, Separation Anxiety creatively combines numerous television shows and elements, including trivia, The Newlywed Game, a hidden camera show and a hint of Set For Life and You Deserve It, in terms of  the main contestant not being in complete control of the game and the second partner being unexpectedly surprised with the good news of receiving a share of the cash prize as well as their emotional reaction.

The gameplay is interesting because it’s like you’re watching two game shows for the price of one. If it weren’t for the hidden camera, “fake Internet game show” aspect, this show would be nothing more than a mere Millionaire knockoff with couples competing, right down to the “helps” (a.k.a lifelines). The aforementioned aspect aides in giving the show its own personality. The questions are appropriately trivial, greatly range in a healthy variety of categories and gradually get tougher at the right times. The Mind Meld mini-rounds are also intriguing to watch as well, not only to hear the entertaining responses from both partners to random “would you rather” or relationship questions, but to also see some of the cool prizes at stake including an engagement ring and a vacation. I also like how inclusive the show is with the producers, the small studio audience, Victoria the bartender and even Iliza’s dog Blanche are all involved with the game in some form or fashion, even though I believe the only reason they added a bartender is to subtly draw attention to the Redd’s Apple Ale product plug. Like many American game show nowadays, the show is built for anyone to play and for anyone to watch and play along with ease and comfort. 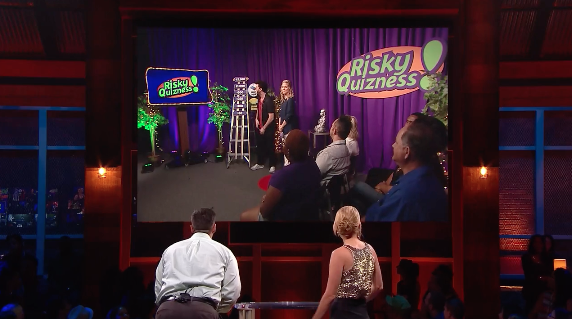 The other gameplay element I’ve enjoyed while watching Separation Anxiety is how well the show keeps the contestants in suspense and on edge during the big money moments. The Crowd Source help best shows how suspenseful the show can become and how big of an impact the dynamic of the main partner having little to no control has on the game as the tension mounts when the host goes through each member of the studio audience and asks for their answer while the main partner is cringes and writhes in anticipation and angst.

Comedians Iliza Shlesinger and Adam Ray are doing a wonderful job with their respective hosting roles. Both hosts keep the show entertaining throughout each episode with Iliza’s improvisational instructions to Adam to mess with the second partner in an amusing and prankish way and with both hosts’ good rapport with the contestants.

Overall, Separation Anxiety excellently mixes the fun of a hidden camera show and a high stakes, relationship-based game show where the fate of the team’s success is largely determined by how well they know their partner personally and in the field of general knowledge trivia. This is the type of game that is similar to Deal or No Deal; although it’s easy to play, you will need a lot of guts and steady nerves to survive. The show flows smoothly and does not stagger, even in between rounds when the hosts utilizes that time to get to know the contestants better and asks about their plans for the money. The only issues I have with the show itself is how the show exhibits spoilers through the teasers – an annoyingly common theme shown on many game shows today. My main concern with the show’s longevity is mostly based on the show’s lackluster, literally subpar debut ratings for a regular cable series and time slot (947,000 total viewers/Tuesday at 10:00pm). Given this is only the premiere, I hope the below average performance will not be indicative of how the series will do throughout its rookie season. Separation Anxiety is a good enough show with an interesting, fun and solid format with an incredible top prize for a cable game show deserving of a better time slot.

Watch new episodes of Separation Anxiety every Tuesday night at 10:00pm ET on TBS! Check out the series premiere on TBS.com.

**All screenshots have been taken from the actual episodes of Separation Anxiety. No ownership is implied.**