Premise – Round 1 – Knockout Round: In the first round, the host asks a series of toss-up questions. Correct answers are worth £100 and the contestant’s choice of which opponent to temporarily knockout and wrong answers temporarily knocks out the contestant who buzzed in. The last contestant standing selects a multiple choice question from the category board of six subjects for a chance to earn an additional £1,000 and a choice of which opponent to eliminate (“cash trap”) for the remainder of the round or risk cash trapping themselves if they answer incorrectly. The process continues until all six questions from the board have been answered.

Round 2 – Head-to-Head Round: In the second round, the host asks a toss-up question with correct answers earning the contestant £200, a choice of question from the category board and which opponent they want to face in the head-to-head question. Once a category is selected, the contestants take turns selecting one of the six multiple choice answers given until the correct one is chosen. A correct answer earns the contestant £2,000 and cash traps their opponent. 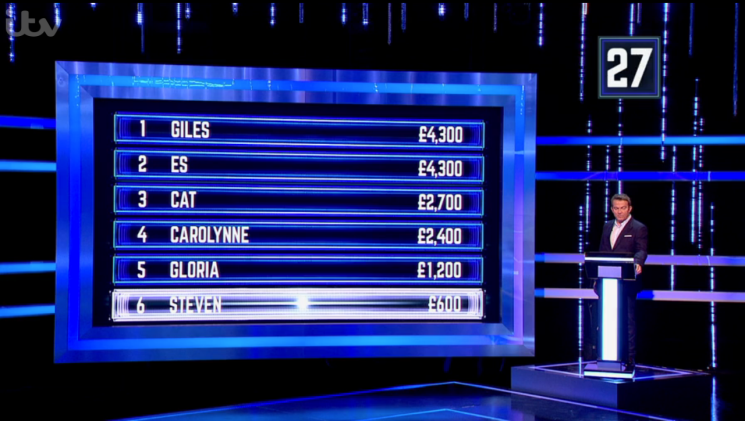 Round 3- Catch Up Round: In the third round, each contestant faces a 45-second speed round and each correct answer is worth £500. The contestant with the highest cash total at the end of the round plays the end game for a chance to win their cumulative bank.

Round 4 – Escape Round: In the fourth round, the leading contestant has 60 seconds to cash trap all five opponents to win their bank. During the round, all the questions are toss-ups open to all contestants to buzz-in and providing an answer stops the clock. If the leader answers correctly, they may select which opponent to cash trap. If the leader answers incorrectly, 10 seconds are removed from the clock. If an opponent answers incorrectly, they will cash trap themselves. If the leader can successfully cash trap all five opponents before time expires, they will win their cumulative cash total, including the money rolled over from the previous shows, and the opponents will leave the show with nothing. Otherwise, the leader loses their entire bank while the other five contestants’ banks are carried over into the next show.

All six contestants remain on the series until a winner is declared.

And now, for the review: 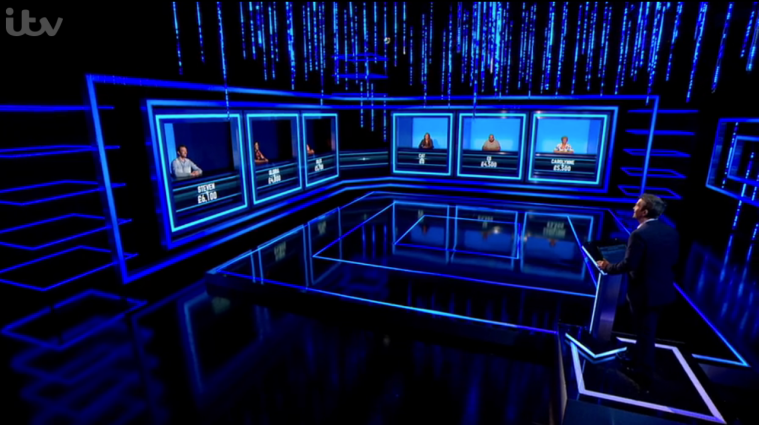 Much like the BBC panel quiz show formerly hosted by Stephen Fry, Cash Trapped is quite interesting to watch. At the top of the each episode, the show fades into a soft piano intro while Bradley Walsh numbers the days and briefly recaps the previous game in a pensive manner to give the show a dramatic feel as if you had tuned into a reality show or a soap opera, as well as subtilely providing a foreshadowing storyline to the current episode.

Although the game play seems slow at first during the opening round, the pace gradually increases with each additional round,  leading up to the 45-second catch-up round and the difficult and fast-paced all-play end game. Each additional game builds tension and the risk and the stakes get higher – thus making each succeeding episode and end game that much more exciting. Besides knowledge, the two gameplay elements that stand out to succeed in this game are strategy and mental stamina. Contestants will need strategy to wisely choose categories and which opponents to face/eliminate, while mental stamina is needed to maintain composure and nerve throughout every show – even in the face of bitter and agonizing losses. You can feel the roller coaster of emotions the contestants endure throughout each episode slowly shift from good-natured, lighthearted fun to disappointment and dejection – or, in Friday’s case, a sigh of relief when a contestant wins their jackpot, meaning they are free from the clutches of the game.

Bradley Walsh devising the format to force the contestants to stay on the show until one emerges victorious and the top player to lose all of their winnings if they should fall short in the final is quite sinister, albeit not emotionally cutthroat like Divided. Although you will see opponents switch from bitter rivals to teammates temporarily forming an alliance during the end game to take down the day’s top player, there are no hard feelings and nothing but good sportsmanship on display (at least from what we can see within the gameplay and post-show interviews). Walsh is the ideal host for a show like this. He is an excellent and proven emcee who has great command and control over the game, ad-libs off the contestants’ answers well, whether they are good or bad, adds much needed levity to contestants who are “trapped” on the show for several days and he also takes the time to familiarize himself about the contestants’ personal lives to make them feel more comfortable and less bored during their untimed stay on the series.

Overall, Cash Trapped is an intriguing, unpredictable quizzer designed for clever, mentally tough and resilient contestants who don’t mind sticking around for the long haul to potentially win tens of thousands of pounds. As much as I like this ITV summer filler, I don’t think it’s going to gin up the viewership figures for it to stay for a second series nor will it generate a lot of interest from viewers who might be annoyed by the sight of the same group of contestants appearing time and time again upon a contestant failing to win the end game. This might be the first and last time we see Cash Trapped. Enjoy it while it’s still around for the next week.

UK viewers, stay tuned for new episodes of Cash Trapped all next week at 5:00pm BST on ITV!  Catch up on the first five episodes on the ITV Hub. For everyone else, you can check out the first episode on YouTube.

**All screenshots have been taken from the actual episodes of Cash Trapped. No ownership is implied.**