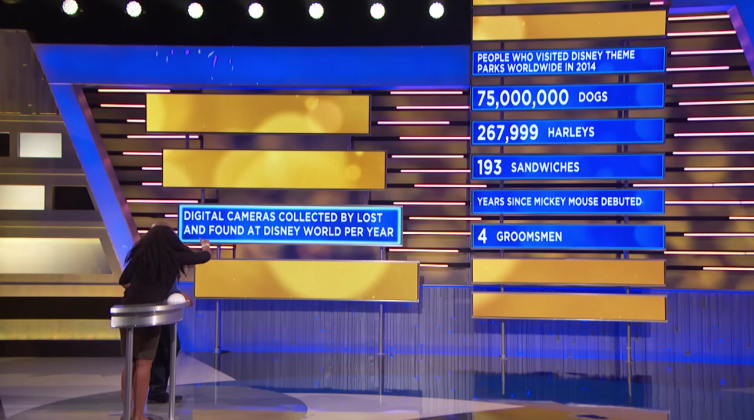 After watching the first episode of GSN’s new game show that’s all about numbers and statistics since the network’s Upfront in March, I had mixed feelings about Winsanity. Starting off with the good qualities, Winsanity has an excellent play-along factor that gets the audience truly invested in the game, especially with thousand of dollars in cool and attractive prizes at stake including a grocery shopping spree, outdoor cinema and a new car. Much like Million Second Quiz,The Million Pound Drop and Boom!, the show also does an excellent job of getting the home viewers involved with the live interactive game on the show’s site on GSN, although it is slightly disappointing that there is no mobile app for the play-along feature. Similar to Easiest Game Show Ever, the random, obscure statistical trivia facts presented on the show make it easy to follow and fun to watch, works well for a healthy wide range of audiences and makes the game challenging in attempting rank them in order. You can feel the vivacity and energy exuding from the audience members, including the ones who aren’t chosen to potentially win, rooting for whomever the solo contestant is because of the show’s central focus on that one specific factor. The game’s subtilely of risk by forcing contestants to keep in mind they can be replaced upon providing an incorrect answer and putting another person in a better position to win the car also adds to the thrill of watching them attempt to achieve “Total Winsanity”.

With this being said, Winsanity still feels incomplete. As simple as the main game is, it seems like it’s too short and they could have done more with the format like having the audience answer a toss-up question with a numerical answer at the top of the show to determine who would play first. The audience sections could have been more creatively designed by separating them by color, as previously seen on Tattletales and Nickelodeon’s You’re On. As host, Donald Faison does good work of injecting as much excitement as possible into each episode. However, there is a noticeable lack of comedic chemistry between he and announcer, Kira Soltanovich – at least on the one episode I’ve seen thus far. Overall, Winsanity is a decent game show that heavily emphasizes and relies on its play-along factor and gives viewers a reason to tune in each week through its live, interactive online game. It has the same likable qualities that brought Wheel of Fortune to prominence, including ease of viewership and the simplicity of its format. Although I am stating this with hesitancy, I think GSN will bring this show back to its schedule for a second season.

Stay tuned for new episodes of Winsanity Thursday nights at 9:00pm ET on GSN! If you’re interested in playing along for prizes during the broadcast, go to GSN.com and play the Winsanity Live online game.

**All screenshots have been taken from the actual episodes of Winsanity. No ownership is implied.**