Premise- In each bout, two contestants will be engaged in a 300-second (5 minute) trivia battle. After the question and the four possible answers have been read, both contestants will have five seconds to lock in their answers. Points are awarded for correct answers and no points will be awarded for incorrect answers. The questions will be worth one point each for the first 100 seconds, two points for the second 100 seconds and three points for the final 100 seconds. During the bout, contestants may opt to use the “Doubler” on their opponent. With the Doubler in effect, the opposing contestant may choose to either answer the question for double the points or “Double Back” and force the contestant whom enabled it to answer the question for four times the points. A correct answer will reward the contestant the point value (up to 12 points; UPDATE: 16 points for 400-second bouts), while an incorrect answer will reward the points to the other contestant. The contestant with the most points when time runs out will win control of the Money Chair. Should a tie occur, a tiebreaker question will be asked. UPDATE: The first aired bout last for 300 seconds. The second and third aired bouts last for 400 seconds. The unaired bouts last for 500 seconds.

The contestant in control of the Money Chair will earn $10 per second and will continue earning money until they lose a bout. The four highest-scoring winners will be assigned to the Winner’s Row, where they will have to temporarily reside in living quarters beside the Hourglass structure in Manhattan until the million-second clock hits zero. The last bout of each show will pit a Winner’s Row contestant against the Money Chair contestant. The designated “Power Player” of the night will decide to either play or force a Winner’s Row contestant to compete in the final aired bout. The winner of the special bout will take control of the Money Chair and will add their opponent’s winnings to their bank.

The four contestants in Winner’s Row and the current Money Chair contestant remaining when the million-second timer runs out will compete in a series of final, knockout bouts. The last contestant standing will win an additional $2 million prize.

Live broadcasting is a lost art when it comes to American game shows. The last live game show to air in the U.S. was Paranoia on FOX Family (now ABC Family) in 2000. Given that it has been over a decade since any game show has made the attempt to air live, The Million Second Quiz did a respectable job of doing so last evening. The live broadcast ran smoothly with a few premature directing calls during the breaks and the gameplay lived up to its promoted name as being fast-paced and intense.

A five-minute trivia speed round plus a pinch of strategy and smart and competitive contestants equals nail-biting excitement and great gameplay. Watching the bouts will keep you on edge for the entire 300 seconds, providing there are no pauses for commercial breaks. This show resembles The Bank Job and The Million Pound Drop by its wide selection of general knowledge questions including information about recent current events and an interactive play-along internet game where you could win yourself onto the program through playing the app.

One in-game element that really took me by surprise was the use of strategy on this show and Winner’s Defense end game. The addition of the Doubler and Double Back options adds more depth to the game itself, especially when it comes down to the last few seconds of a bout and when contestants use it like a Hail Mary Pass to win the game. The Winner’s Defense bout was another surprising element. Already, we have seen a contestant essentially double their winnings by a little over $70,000 by stealing their opponent’s bankroll upon winning the bout. Similar to the Terminator round on Greed, it’s going to be interesting to see the rising cash at stake and at risk in future Winner’s Defense bouts and what future designated Power Players will decide to do.

The $10/second payout rate works for a show like this because it exemplifies why endurance is key in this show, beside the players in Winner’s Row having to essentially live beside the hourglass until the final show. While we may not see any staggering, million-dollar payouts anytime soon, there have been a few contestants who have won impressive five and six-figure amounts for primetime television.

Ryan Seacrest is the optimal choice as host of The Million Second Quiz with his experience as a game show host and hosting live television programming such as American Idol and Dick Clark’s New Year’s Rocking Eve. His enthusiasm, social and amiable presence when speaking to the contestants, making appropriate, relevant comments while the contestants are locking in their answers during bouts and asking the questions in an undistracted and hasty fashion makes the show more enjoyable and exciting to watch. Seacrest’s minute-long interviews with the contestants reminded me of how Bill Cullen and Dick Clark would conduct their contestant interviews to make them feel less nervous and more comfortable before proceeding with the game.

I’ve given you the pros. Now, it’s time for cons and the problems I have with this show.

Better Explanation of Rules: If you have played The Million Second Quiz online game regularly and have watched the intro briefly explaining the game’s rules, you will already have a general idea of how each bout is played. Being the series premiere, the producers need to have Seacrest explain the rules for the live broadcast bouts.  There was no clarification on the time limit, point structure or on the unlimited use of Doublers and Double Backs: two key factors that are critical to the game in which the home viewers need to be aware of firsthand at the top of the show. This is the same issue that Who’s Still Standing had which was partly responsible for making the show unbearable to watch. I understand that, as the viewers, we are tuning into the show while the non-stop clock is running; however, a special exception should be made to fully explain the bout rules, considering it’s the show’s series premiere in primetime. I hope the producers make the adjustments to remedy this issue later this week, but we will see what happens.

Too Many Gaps Between and During Games: Each bout lasts for roughly 300 seconds, or five minutes. As an hour-long game show that promises ‘non-stop’ trivia, one would expect at least five to seven bouts played per show, taking account for commercial breaks, behind-the-scenes clips and contestant change-outs. On the first episode, only three bouts were played – meaning, out of the 60 minutes of airtime, only 15 minutes were devoted to gameplay. It doesn’t make any sense how only three games were played for the entire show. While the lengthy pauses in between and during bouts are swing in the Money Chair contestant’s favor by earning more money, it is disadvantageous to the viewers who are looking from the outside in who are waiting for a bout to start. Also, the extra clips featuring the Line Jumper ambushes should be shortened or removed altogether and the commercial breaks need to be placed in better spots. There were two unnecessary commercials breaks that aired during the third bout, which could have been replaced with another bout.

Fake Suspense: On the final question of the night after Brandon locked in his answer, the show attempted to build pointless suspense by removing two incorrect answers, leaving only the correct and incorrect answers. If this method had been used throughout the show, then I would be more open-minded to the idea. Otherwise, it’s not need. The game itself is suspenseful enough without making corny and futile attempts to add useless, dramatic elements.

Interactive Glitches: During the week and a half-long season, viewers will be able to play along with the show via smartphone and watch the 24/7 live coverage of inside the hourglass at anytime on the show’s website. On The Million Second Quiz’s first day and first airing, there were technical difficulties with the live feed as viewers were not able to readily tune in to see bouts in progress and problems with the smartphone app once the update was applied as users could not open the app without it sending an error message and closing constantly. As seen on Channel 4’s The Million Pound Drop, the interactive play-along feature also needs to be enabled online for non-smartphone users and people who may not want to download the app. These issues definitely need to be fixed quickly to enhance the audience’s viewing experience, especially in the relatively short period of time that this show is on the air. 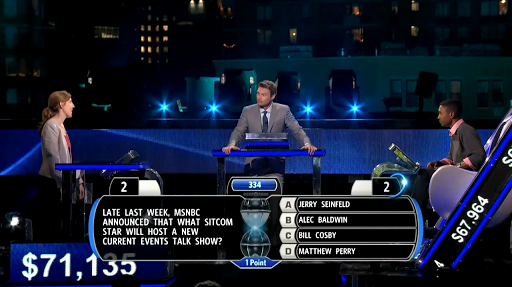 During the show, I tweeted that The Million Second Quiz is a “great” show, and I stand by that statement in terms of its exciting, high-risk, high-stakes and mentally intense gameplay and interesting concept. There are not many American game shows nowadays which employ a quick-fire trivia format, but I appreciate them and do not take them for granted every time one hits the television airwaves. As I have previously mentioned, there is room for improvement in terms of the show’s overall execution. The behind-the scenes and Line Jumper ambush packages are a nice touch, but are not needed since the show is about the players’ playing the game and not their background story as to how they arrived to the show. Achieving a 4.8 rating (about 6 ½ million viewers), The Million Second Quiz had a good start in its debut for a summer game show. If you had watched the first series of The Bank Job and its live broadcasts, you may have seen the technical issues the show ran into throughout the week and it was recommissioned for a second series. I believe the producers will iron out the kinks in the show’s format during the offseason and predict and hope that this show will be renewed for a second season. It has already made its social networking presence known with its use of basically all of the major social media sites along with the interactive app. This will not be the last time we will see The Million Second Quiz.

Watch new episodes of The Million Second Quiz for next two weeks live weeknights at 8:00pm EST on NBC!

**All screenshots have been taken from the actual episodes of The Million Second Quiz. No ownership is implied.**